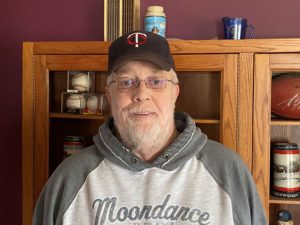 Alan Lee Nelson, age, 64, of Freeborn, MN died Thursday, May 19, 2022 at St. Mary’s Hospital in Rochester due to multi-organ failure caused by several aneurysms.  As per Alan’s wishes, he will be remembered with a Celebration of Life on Sunday, June 26th, 2022 from 1:00-4:00 PM at TB3’s in Freeborn, MN.  Nasinec Funeral Home in Wells is assisting the family with arrangements. Please see www.nasinecfh.com to leave online condolences.

Alan (Al) was born October 4, 1957 in Forest City, IA the son of Leslie and Gladys (Engebretson) Nelson.  Al and his family moved to the Freeborn area in 1968.  Al graduated from Freeborn High School, the class of 1976.  In high school, Al was a great athlete, participating in many sports.  He was also a great sports fan, especially the Minnesota Twins!  He really enjoyed taking a cruise in one of his many classic cars.  Attending concerts was a lot of fun for him because he was with his friends.

On July 28, 1979, Al married Penny Johnson at the Pioneer Village Church at the Freeborn County Fairgrounds.  The couple later divorced, but remained very good friends to the end of his life.  Al was in customer service most of his life.  He was a parts man at Bill Olson Chevrolet in Albert Lea, a salesman with High Plains Equipment of Dalhart, TX, owner and operator of the Powerhouse Bar and Grille in Freeborn, and a service writer for Wayne’s Repair in Freeborn.

Al was preceded in death by his parents and many aunts and uncles.