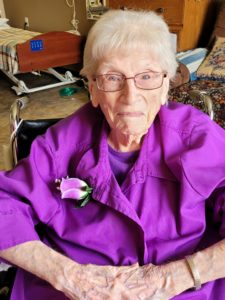 Lavon was born July 15, 1931 on a farm in Brush Creek Township, Faribault County, MN, the daughter of Willie C. Johnson and Caroline E. (Goette) Johnson.  She was baptized at St. Paul’s Lutheran Church in Kiester, MN.  She was confirmed at Bricelyn Lutheran Church.  She attended Jelle’s Country School and graduated in 1949 from Bricelyn High School.

She was married September 23, 1951 to Arlow W. Hove at Shiloh Lutheran and they had four children. Lavon and Arlow farmed in the Bricelyn area their married life.

Lavon worked at the bank in Kiester for five years, after her children were born. She was a homemaker for about 14 years and then worked at the Bank in Bricelyn for 26.5 years until she retired in 1996. She enjoyed gardening, sewing; she sewed many costumes for her grandchildren, crafting, quilting with her friends at South Blue Earth Church.

She was preceded in death by her husband Arlow Hove, son Keith Hove, great grandson Dax Hove, and her parents.