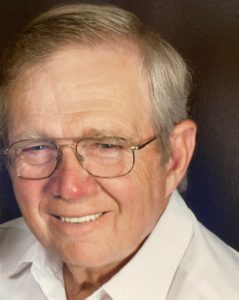 George E. Miller, age 90, of Wells, MN, died Wednesday, September 28, 2022 at his home with his family and friends surrounding him. A Funeral Service will be held Wednesday, October 5th, 2022 , at 1:30 PM at Bridge Community Church in Albert Lea, MN, with Pastor Mark Miller officiating. Visitation will be held Tuesday, October 4th, 2022, from 4:00 to 6:00 PM at Nasinec Funeral Home and will continue one hour prior to the service at the church on Wednesday (12:30 PM to 1:30 PM). Interment will be in Rosehill Cemetery. Nasinec Funeral Home in Wells is entrusted with arrangements. Please see www.nasinecfh.com to leave online condolences.

George was born August 19, 1932 in Winnebago, MN, son to Willie and Clara (Langworthy) Miller. George grew up on the family farm in Delavan and attended Delavan Methodist Church. He graduated from Delavan High School in 1951. He continued farming and was united in marriage to Marilyn Hoffman in 1957. George worked for Wells Prestress until retiring in 1999 after 33 ½ years. George and Marilyn welcomed their first child; Linette in 1968, and their second child; Eric in 1970. George was active in his children’s school and sports activities. He enjoyed family vacations, fishing, and playing cards. George had a real sweet tooth. He also spent his time socializing, building things with his hands, and admiring Ford cars and Farmall tractors.

Left to cherish his memory is his wife of 65 years Marilyn, his daughter Linette Miller of Hutchinson, MN, his son Eric Miller and fiancée Kimmy of Wells, MN; grandchildren; Alisha Miller and Jarrod of Hutchinson, MN, Tyler Pagel and Stephanie of Hector, MN, Eran Miller and Ashley of Wells, MN; great-grandchildren: Jace, Tatum and Matthew; sisters: Beverly (Miller) Hayes of Forest City, IA, and Marilyn (Miller) Stensland of Blue Earth, MN, along with many nieces, nephews, and their families.