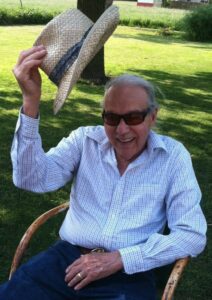 A Celebration of Life service will be Friday, January 27, 2023 at 1:00 PM at Nasinec Funeral Home in Wells, MN, with Pastor Peg Marose officiating.  Visitation will be one hour prior to the service at the funeral home (12:00-1:00PM), with full military honors accorded by the Wells Color Guard.  Please see www.nasinecfh.com to leave online condolences.  Nasinec Funeral Home is entrusted with arrangements.

Lawrence graduated from Las Cruces High School in New Mexico, the class of 1955 and entered into the US Air Force.  Lawrence was united in marriage to Felicianna Valenzuela and to this union 4 children were born, the couple later divorced.  Lawrence was married to Lena Jane (Scott) Milks in 1981.  He worked for many years and retired from White Sands Missile Range in New Mexico

He enjoyed watching car racing.  Lawrence was a “jack of all trades”, and could fix and repair many things.

He is preceded in death by his parents, son Michael Milks (2022), and daughter Heather Kauffmann (2014).